For many, the year 1994 seems a distant, vague memory. Most people do not recollect all of the major events that took place that spring 15 years ago — like the May 6 opening of the Channel Tunnel between England and France, or the May 10 inauguration of Nelson Mandela as South Africa’s first black president.

Few remember that on May 10 that year an annular eclipse of the sun cast a shadow across much of North America. But relatives of the Vaccarello family of Bay Ridge, Brooklyn have crisp memories of that spring when they were enshrouded in their own cloud of darkness, cast by an eclipse that suddenly befell their world the night of May 1. For some, the tragic event that occurred that night is a hazy, remote memory. For 28-year-old John Vaccarello it is a vivid and recurring nightmare. 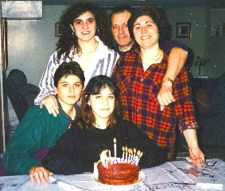 Copyright Queens Chronicle
From left, John Vaccarello with Maria, Giovanni, Caterina and Concetta in a photo taken shortly before the car crash the claimed his mother’s and sisters’ lives, and severely injured his father.

It was the night his parents and sisters were hit by a speeding car that tore down Cross Bay Boulevard at 70 miles per hour with its headlights off and a drunk driver behind its wheel. After it blew a red light at 163rd Avenue, the 1982 Lincoln Continental slammed into Giovanni Vaccarello, then 51, his wife, 45-year-old Caterina, and daughters Maria, 18, and Concetta, 17.

Only John, the family’s youngest child, was spared: the 13-year-old remained in the party room at Russo’s on the Bay in which his relatives had just finished celebrating the 25th wedding anniversary of his aunt and uncle. His parents and sisters exchanged their goodbyes with other relatives and left the catering hall. They were crossing the street when 55-year-old Abraham Meyers, an Ozone Park janitor, plowed into them.

The force of the impact threw Giovanni and Concetta about 60 feet across the divider and into the opposing lane. Meanwhile, the car dragged Caterina and Maria about 200 feet, killing them instantly, before it veered onto and climbed the divider, bashed into a pole and ricocheted back onto the road. Giovanni suffered a heart attack and broke his leg in three places, and Concetta suffered severe head injuries. Both were taken to Jamaica Hospital where Giovanni was listed in critical but stable condition and where Concetta died several hours later.

Some 1,500 mourners filled Our Lady of Guadalupe Roman Catholic Church in Bay Ridge the morning of May 6, 1994, as Mass was celebrated for Caterina Vaccarello and her daughters. As reported in The New York Times the next day, “They sat in somber silence until, shaken by the sight of 18 pallbearers bringing three white-draped coffins down the aisle, their muffled communal sob rippled toward the altar.”

In stable condition at the hospital, Giovanni Vaccarello did not attend the Mass, but earlier that morning he visited a local funeral home to say his final goodbyes to his wife and daughters.

The day of the funeral, a grand jury indicted Meyers, whose blood-alcohol level that night had been .23 percent — more than twice the legal limit, which in 1994 was .1 percent — on three counts of depraved-indifference murder (today known as second-degree murder), reckless manslaughter and vehicular manslaughter. He pleaded guilty and was sentenced to 15 years to life in prison.

After the sentencing, on Jan. 26 1995, Giovanni Vaccarello told the New York Post, “I wish I could put my hands on him for two minutes. I’d break him in little pieces. I’d make him suffer the way I’ve suffered. I lived for my family. My greatest source of joy came from them.” Shrugging at the penalty Meyers received, Vaccarello said, “It’s better than nothing. But don’t forget, each life of mine cost him only five years.”

Relatives of Vaccarello, who died in 2007 after a year-long battle with cancer, did not forget. His son John, with whom he had been very close, and niece Maria Chieco, 27, have vowed to do everything in their power to keep Meyers in jail for the rest of his life.

The week of Dec. 8, Meyers, who turns 70 on Dec. 3, will meet with a parole board for the first time since he was incarcerated at the Attica Correctional Facility in upstate New York on Feb. 17, 1995. According to the state Department of Correctional Services, the earliest date on which Meyers can be released is April 24, 2009.

But John Vaccarello and other family members will fight to prevent Meyers’ release: they are meeting with an officer from the state Division of Parole on Friday, Nov. 21 to explain why Meyers’ freedom should be denied. According to Chieco, the family has long been counting down to and preparing for this day.

Relatives have written heartfelt letters, gathered newspaper clippings, collected photographs and rallied community support: they managed to obtain 1,300 signatures on a petition calling for the parole board to deny Meyers’ release. Additionally, many relatives will attend the meeting on Friday.

All of that is designed to convey the family’s point: “Is 15 years in jail really a lesson?” Chieco asked, noting Meyers’ long criminal record. Since moving to Queens at the age of 17, the South Carolina native had many run-ins with the law. At the time of his 1994 arrest, Meyers had been without a valid driver’s license for 27 years. Prior to that, the convict had his license suspended 26 times.

According to published reports, Meyers was arrested nine times between 1960 and 1978 for various crimes, including assault, driving while intoxicated, driving without a license, reckless driving, drug possession, grand theft auto, resisting arrest and promoting gambling. It was reported that police said they could not be certain whether Meyers had ever actually gone to jail.

In addition to keeping the repeat offender off the streets, Chieco said denying Meyers parole will spread awareness and send a clear message to the public about drunk driving and its repercussions, just as the Vaccarello family’s tragic loss had, on its own, sent a message to state legislators.

In the March-April 1995 edition of Transportation Alternatives magazine, an article titled “Throwing the Book at Killer Drivers” reported that on May 10, just nine days after the incident, the Assembly Codes Committee met in Albany for a discussion about the Scofflaw Act of 1993.

According to its sponsor, Assemblyman and Codes Committee Chairman Joseph Lentol (D-Brooklyn), the law was created with the express purpose of saving lives by catching reckless drivers before they kill. Starting just six months after it was enacted, the law had already failed to live up to the expectations of its sponsors and the Vaccarello tragedy was further proof that Law 511 just wasn’t working.

Since then, legislators have worked to make the laws more stringent, using deterrents, such as heavy fines and long jail sentences, and more severe punitive action.

If Meyers is denied parole at his December hearing, he will serve an additional two years before becoming eligible for parole again. Each time an inmate is denied parole, he typically becomes eligible again after 24 months — a process that can continue for the duration of his life.

John Vaccarello will also live the rest of his life in a prison of his own: while he has freedoms and rights, and can go and come as he pleases, a part of him will forever be trapped in the memory of that devastating spring night in 1994. But his won’t be an entirely lonely jail cell, according to Chieco, because the entire family will be trapped right there with him.

“To really grasp how the tragedy … changed our lives, you need to understand our family dynamic,” Chieco, whose mother was Giovanni Vaccarello’s sister, wrote in a statement for the parole officer. “We were cousins, best friends, brothers and sisters.”