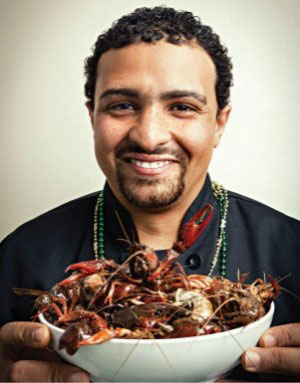 A chat with chef Bobby Bouyer is like a stroll down Bourbon Street in New Orleans’ French Quarter. In his faded Cajun accent and with warmth in his voice, he described the simple joys of cooking tangy molasses-smoked barbeque and tender slow-roasted brisket. Louisiana-style cooking is rustic and focuses on seasoning in layers and understanding the nuances of the ingredients. Then again a lot of other cuisines are like that too. But in the South it’s the hospitality that forms the foundation of any authentic dining experience.

The half Creole and half Cajun Louisiana native brought his zesty roots to Mineola, where cookie-cutter chain restaurants abound. He developed the menu at Biscuits & Barbeque, a converted 1947 railcar restaurant with only 6 booths and 15 counter stools. “It’s an intimate environment,” Bouyer said, “which makes it easy from the kitchen standpoint to really focus on each plate and get things right.”

In the two years since it opened, the tiny restaurant, which sits on a quiet street in an industrial part of town, has drummed up considerable attention. “I think we carved ourselves a little niche,” Bouyer said. “We’re staying true to Creole-Cajun seasoning. Low and slow cooking technique is what it’s really all about.” Grasping the difference between Creole and Cajun cuisine involves a thorough history lesson, which Bouyer is happy to provide, but he summed up the distinction simply: Creole food is rooted in refined aristocracy, Cajun food descends from rural and rustic origins. While the restaurant offers traditional Southern fare like fried chicken, Bouyer has also introduced staples of his childhood: Muffuletta and po’ boy sandwiches, shrimp gumbo, jambalaya and alligator ribs.

Alligator is not a typical menu item, nor is it one that most restaurants could easily serve up. Bouyer, who gets his ’gator products from Florida, said the cooking process is a challenge. Tough and extremely lean, alligator meat requires very low heat and extra long cooking periods—a true case of “low and slow.”

Bouyer has worked tirelessly to train Biscuits’ kitchen staff in the ways of the South, even sending a chef to New Orleans for a firsthand experience. “They’ve learned a little bit about Southern hospitality,” he said, “and Southern gentility, which is that love; that person-to-person relationship where you take a little extra moment to smile or share a quick story.”

“Hell,” Bouyer added, “I’ve even got some of them saying y’all.”

Before moving to West Hempstead with his family, Bouyer pursued a new world of food while finishing a degree in culinary arts at Kendall College in Chicago. After a stint cooking on a cruise liner he returned to Chicago to open an ice cream shop specializing in unconventional flavors like avocado, beer and sausage. Considering his history making a dessert that tastes like beer, an alligator entrée isn’t far-fetched.

But always a Louisiana boy at heart, Bouyer returned to the French Quarter to work as a chef at the popular Palace Café. Despite witnessing the reemergence of the Southern spirit following Katrina, Bouyer decided it was time for a fresh start and moved again—this time to Long Island. It didn’t take long for him to pick up on a local trademark.

“There’s a little bit of curtness that is kind of status quo in New York,” Bouyer said. “What we preach is good service for our guests. It’s all about Southern hospitality and how we go far and beyond to make sure…you’re gonna have someone who really cares and gives you that extra attention.”