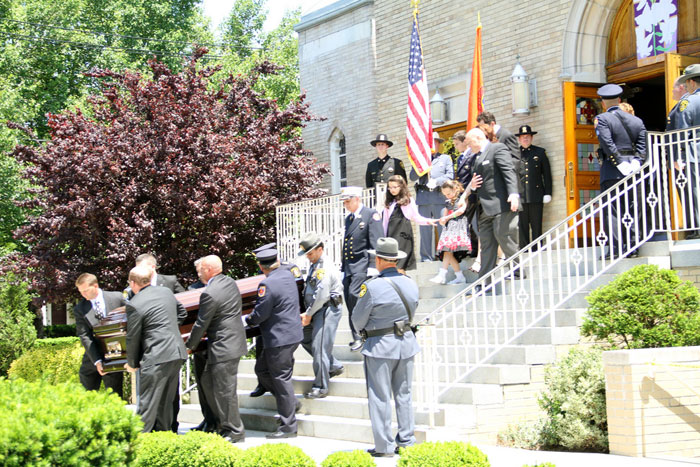 Copyright LIHerald.com
A funeral mass was held for James Callahan III at St. Thomas the Apostle Church in West Hempstead on May 31, 2011.

[Note: This article and its accompanying photos originally appeared on LIHerald.com on May 31, 2011. This content is the rightful property of Richner Communications, Inc.]

Hundreds of people filled the pews at the St. Thomas the Apostle Church in West Hempstead last week to pay their last respects to James Callahan III, who died May 26, several weeks after he was diagnosed with cancer and suffered a stroke.

Friends and family members said they were overwhelmed by the outpouring of support they received, and thanked the various elected officials and public servants who attended the May 31 funeral mass of the late Malverne deputy mayor, who was also the commissioner of the county’s emergency management office.

As Callahan’s wife, Patricia, walked in behind the casket to the altar with her children, Thomas, Katherine, Elizabeth and Christina, people began to sob, drowning out the soft organ music that played in the background. More tears were shed when Patricia decided to follow the eulogy her brother, Joseph Canzoneri Jr., had given with one of her own.

“The emptiness I feel today cannot be described adequately by words,” she said. “Jimmy and I shared every aspect of our lives together. We were truly best friends. We were partners intellectually and in managing our household and children. I have no regret today as I stand before you because Jimmy and I shared a very special love, one that caused us to say ‘I love you’ multiple times throughout every day.” 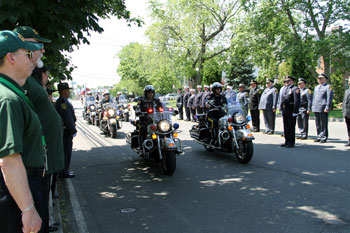 Copyright LIHerald.com
Hundreds of people turned out to pay their last respects to the late Malverne deputy mayor and commissioner of the county Office of Emergency Management.

Patricia went on to say that her husband had shared his life with many people and touched many lives. “We have all lost today — not just me and my children,” she said. Out of respect for Callahan, she added, she must share her family’s loss with everyone.

At the Malverne Village Board’s June 1 meeting, it was clear that Callahan’s death had a far-reaching effect. Almost everyone who spoke at the meeting — including the board members, department heads, civic leaders and village residents — had something to say about the late deputy mayor.

“It was an honor and a privilege to work with Jim,” Mayor Patricia McDonald said. “He was wonderful at guiding this board. … When I look to my right and Jim’s not here, it’s very surreal. … It will take a very long time for it to sink in.”

Trustees Michael Bailey, Joe Hennessy and John O’Brien, and village Attorney James Frankie, each spoke about their experiences working with Callahan in his 12 years on the board. “His knowledge … was inspiring,” Bailey said. Hennessy called Callahan an “attribute” to the village and O’Brien described him as “the quintessential public servant.”

Frankie said Callahan’s presence on the board was of great help to him personally: prior to taking on the role of commissioner for the county’s emergency management office, Callahan was a partner in a Baldwin-based law firm. “Unless you worked with him, you have no idea how bright he was,” Frankie said. “He made all of our jobs easier.”

While he loved his work, both in the county and the village, it was his family that Callahan put first, according to Hennessy. He recalled something Patricia Callahan had said at the funeral mass about notes — with messages like “I love you,” “I miss you” or “I’ll call you soon” — Callahan would leave hidden around the house for his children to find when he went on business trips.

“I think if you really want to know about Jim Callahan, that says it all,” Hennessy said.

Paul Jessup, head of Malverne’s Department of Public Works, said that he and Callahan became close in the 11 years they worked together. Even when they socialized, he said, they were getting work done. “Jim always gave 110 percent,” he said. “He was the only one I could call at 3 a.m. and know he was sitting in his office.”

On behalf of the Malverne Public Library, Cathy Wellikoff read a note expressing condolences to Callahan’s relatives. “None of us have been able to shake this feeling because he’s a neighbor and someone we see on T.V. and we feel close to him,” she said. “The tragedy of it is beyond our ability to comprehend and accept.”

Callahan, who was 42 when he died, had been re-elected to his fourth term as a trustee on the Malverne Village Board on March 15. County Executive Ed Mangano, who attended the funeral mass, swore Callahan in to his seat on April 4. Less than a week later, Callahan suffered a stroke. He was hospitalized for six weeks, during which time he was diagnosed with cancer.

Mangano was among the numerous county officials who attended Callahan’s funeral mass. Acting Police Commissioner Thomas Krumpter was there, along with dozens of uniformed officers and county fire marshals. Hempstead Town Supervisor Kate Murray also turned out for the funeral. 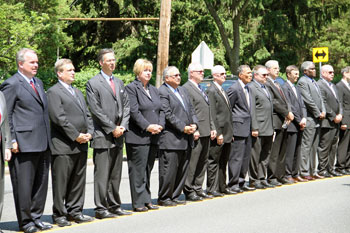 Copyright LIHerald.com
Dozens of town and county officials lined up outside the church to watch as the casket of James Callahan III, the late commissioner of the county Office of Emergency Management and Malverne Village deputy mayor who died May 26, was placed inside the hearse.

Outside the chapel, in a line down the center of Westminster Street, which was blocked off by police cruisers and fire trucks, dozens of county and town leaders stood with their hands over their hearts. They watched as Callahan’s casket was brought out and a county bagpipe ensemble began to play a piece. As mourners filed out of the church, three county helicopters in a “V” formation flew overhead, giving the sign that it was time to load the casket into the hearse.

The elegance of the funeral mass, procession and burial at Holy Rood Cemetery in Westbury were a testament to the respect people had for Callahan, and for the love and support they provided his family during his illness and after his death, McDonald said. Many who shared their feelings about Callahan said they were only giving back for what he had given the village and county in his professional roles and personal character.

“What I have often marveled about is how he did it so humbly,” Patricia Callahan had said in her eulogy. “He never boasted or bragged, he was wonderfully selfless in the things he did for so many people. He was happy being in the background and never sought recognition for his kindness.”

Patricia had maintained her composure until she began to speak of the lesson her late husband’s death has taught her. “It is up to all of us here today to fill the tremendous void left by Jim’s absence,” she said. Her voice caught in her throat, but she continued to speak, determined to deliver an important message. “I think we all now realize how fragile and precious our lives are,” she said. “Please spend that time on the things most important — your family, good friends and don’t worry about the small stuff.”