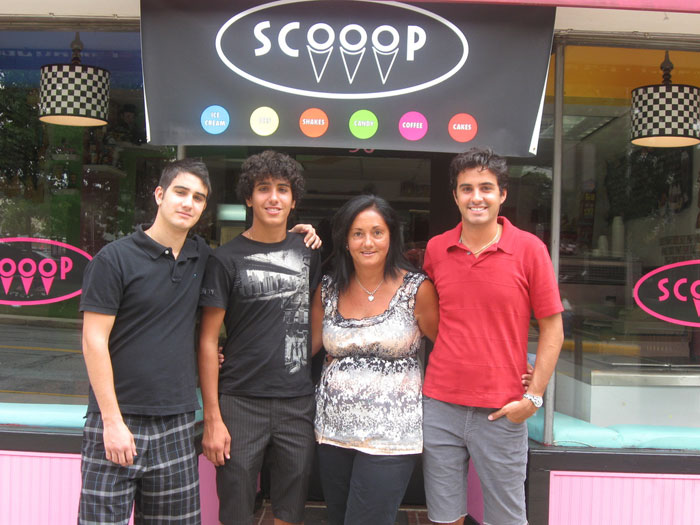 [Note: This article and its accompanying photos and videos originally appeared on LIHerald.com on August 11, 2010. This content is the rightful property of Richner Communications, Inc.]

When you walk into Scooop, Malverne’s new ice cream shop, it feels like you’ve walked into a scene from Now and Then, the 1995 movie that made many a little girl wish for a time machine to travel back to the early 1970s.

The family-owned Scooop, which Malverne residents Diane and John Angelis opened in place of Crystal Ice on Aug. 1, is a throwback to that era, depicted so well in the film as a time when ice cream sodas were the rage and kids could ride bikes all over town, swinging AM radios from their handlebars.

There’s no question that summery, care-free, youthful vibe will go a long way toward achieving Diane’s goal of making the shop Malverne’s favorite hangout. And it doesn’t hurt that the place, which is decorated with old family toys, stays open until 10 p.m. every day until Labor Day.

But if the inviting signs and colorful decor aren’t enough to draw in customers, the selection certainly is. Patrons can choose cones, cups, sundaes, banana splits, ices, shaved ice, soft-serve, floats, milkshakes and fat-free yogurt. While children need little convincing to go to an ice cream shop, they get a bonus for coming into Scooop: chalk-board tables where they can doodle and scribble their heart’s delight.

For adolescent girls, there’s always the other incentive: the Angelis’ three teenaged sons who take turns working shifts. Until school starts, Evan, 21, Nicholas, 18, and 14-year-old Alexander are serving up scoops with their mom, who is loving every minute of owning the shop.

“What’s not to love?” Diane asked on a recent hot August day. “I love Malverne, I love the people, the community. It’s so tight-knit.” That’s what brought the Angelis family, who owns a number of restaurants throughout New York City and parts of Long Island, including Nick’s Pizza in Rockville Centre, to Malverne from Queens 13 years ago.

And Diane’s not the only one who loves Scooop. Her children love it, neighbors and friends love it and even Malverne Village Mayor Patricia McDonald loves it, according to Diane, who said people have been coming in regularly since the store’s opening. And everyone’s got suggestions: stay open year-round, serve soup in the winter, offer frappes and dessert, sell candy and so on. The shop already offers coffee and sells cakes, and Diane has already ordered two benches and a new awning to make the place more inviting, but she welcomes all suggestions, as she’s still unsure of what her next steps are.

Thinking ahead, Diane is planning to add frozen yogurt to the menu and stay open at least through holiday lighting. She’s also working to put together contests for kids to make ice cream even more fun. But there are still many details to figure out. Buying the store in mid-July and having it open and running barely two weeks later, the Angelis family had to move quickly. Although they’re still in the very early stages of running this business, they’ve managed to create an atmosphere of familiarity that makes patrons feel as though the shop has been around for decades.

“It was very sudden,” Diane said of the decision to buy the store. “At first I said to my husband, ‘I don’t know if I want to do this’ — I was scared. But what made me decide was the thought that a stranger could come in and buy this place.” By opening the place herself, Diane felt she would be contributing to that sense of community that defines Malverne. She would also be helping to recreate for her children and those of the neighborhood what she had as a child: growing up, Diane would frequent Jahn’s Restaurant and Eddie’s Sweet Shop, where ice cream cost mere pennies and hours were passed laughing with friends. The bottomline, Diane said, “I just want it to be a happy place.”

Scooop is open from noon to 10 p.m. seven days a week, although hours will change once school starts. Although the shop does not have a website yet, patrons should keep an eye out for a Scooop Facebook page. Until then, Diane welcomes everyone to drop in and check it out.